Saint George is the Patron Saint of England (and indeed more than a dozen other countries) and Google have today celebrated St. George’s Day with a Doodle.

Although born in Wales I was brought up in England so am proudly bipartisan. Well, tripartisan when you consider the Irish roots too!

I just bought a book, Making Ideas Happen, from my local Waterstone’s bookshop. However it was £9.99 and a whole penny shy of their £10 limit to get a loyalty card stamped I missed out on getting a stamp closer to a ten pound token.

Slightly aggrieved, and perhaps with some buyers remorse as I sat down to read a chapter from the book in the local park with an ice cream I wondered how much it would have been be online. I fired up barcode scanner and was soon at Google Books where I saw that Waterstone’s own online bookshop was selling the book three pound cheaper at £6.99. As some shops do a collect in store service, I thought I’d visit the site and see how easy it would be to order online on my phone and then pick up in the local shop so next time I can support my local bookshop, but still benefit from a discounted price.
END_OF_DOCUMENT_TOKEN_TO_BE_REPLACED

Inc. magazine have just reported on How Google Is Killing Organic Search.

That lead me to the excellent graphic by Wordstream, Google Ads and the War on Free Click. Like many infographics it’s too wide to reproduce comfortably here but it is worth looking through.

The war on organic search has been going on a while, and it’s going to get worse for small business.

How long will it be until there aren’t any organic results on the first page?

Google have a new Doodle for the UK market celebrating Saint David’s Day, the patron Saint of Wales.

Being born in Wales myself I couldn’t pass up the opportunity to share it.

There have been similar applications before that got rid of the clutter and make the reading experience both more enjoyable and easier, now Evernote’s Clearly has been released for Chrome users.
END_OF_DOCUMENT_TOKEN_TO_BE_REPLACED

Google’s Logo today celebrates Stanislaw Lem, in particular the 60th anniversary of the publication of his first book, The Astronauts.
END_OF_DOCUMENT_TOKEN_TO_BE_REPLACED

Over the many years I’ve been developing websites and working in Search Engine Optimisation I’ve developed a number of scripts, tools and bookmarklets.

Inspired by Small business advice from Jason Fried 37signals, then reading Getting Real and with a pricing structure influenced by
Pinboard I decided to release the Online Sales Webmaster Tools as monthly paid subscription.

I’ve already got more than 50 tools and bookmarklets in the offering and I have many more to publish. The price increases with each new subscriber so it pays to get in early.

These tools are forged in the “less is more” mold, so if you find you outgrow them and need more, consider the SEObook Community & Tools or Raven SEO.

In the meantime, the Online Sales Tools will do pretty much all you need as a webmaster at a low monthly cost. Note that the annual fee is less than the cost it would take to pay a programmer to develop just one or two of these tools.

Well, it wasn’t much of an accident. I took a domain that was several years old, and a PR3, but I hadn’t done much with it for months. The domain was to expire on 19th of January 2011. I let it. A few days later the site stopped resolving and was replaced by a parked page.

On the 28th of February I was sent the message that the domain was to be deleted that day. I still waited and on the 1st of March I renewed the domain.

As of the 3rd of March Google reported the domain as grey PR (using the SEO Book toolbar) and no cache date. Searching for the domain name (which is a unique phrase) and my domain wasn’t returned.

Now it’s the end of the month, and I’ve searched again. The domain is returned as the second result and the Page Rank now appears as PR1 with a cache date of 3 weeks ago.

The domain remained a PR3 after the January Google Page Rank update so the drop unfortunate and looks like it was recalculated after the expiry. As regards the cache, as the domain still gets no content love from me so the date is reasonable.

If you’re not link building then your site is getting weaker each and everyday. 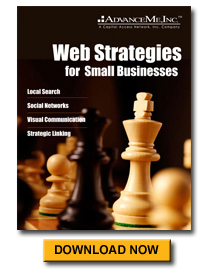 I was absolutely delighted to be included in a fantastic free eBook “Web Strategies for Small Businesses“. The book is a compilation of small business tips focusing on multiple Internet strategies. I provided the “Building Web Success – Optimizing Online Conversions”, but there’s good stuff there too!

The eBook is free for download to visitors of AdvanceMe.com, a leading merchant cash advance provider in the United States.